Nevada Women’s Philanthropy was founded in November of 2005 by Dena duBoef, Heather duBoef, Marcelle Frey, Dana Lee, Trina Pascal and Tawny Sanders who sought a direct and impactful approach to philanthropy. Before long, the group of six found themselves among dozens of like-minded women. Instead of granting funds that became absorbed in an organization’s day to day operations, NWP members rallied around the idea of making an investment in their community.

The members of NWP created a unique giving circle that emphasized philanthropic giving with business acumen. The mindset is to invest in sustainable ventures with value-driven returns. NWP remains an all-volunteer group that undertakes a structured process to determine one Impact Grant recipient annually. The size of the Impact grant is directly based on the number of members who each give $5,000 in dues. The “one-member, one-vote” format empowers every member to make her impact. Year after year, NWP continues to encourage nonprofit agencies to bring innovative projects that address critical community needs with sustainable programs.

NWP is a donor-advised fund through the Nevada Community Foundation. All donations and membership dues are tax-deductible.

Nevada Women’s Philanthropy (NWP) members elected to grant $500,000 to SafeNest. The project to be funded includes a city-wide expansion of the Project Safe 417 (PS417) program. This year’s $500,000 Impact Grant is the largest investment NWP has made since it was founded in 2006; it also reflects the organizations largest membership in its history. The 2020 NWP Founders Gift of $30,000 unrestricted funds was awarded to Three Square Food Bank.

Want to make your impact? Join NWP now for the 2020-21 grant cycle and be a part of it all. Contact membership chairs at membership@nwpsnv.org for more information, or click to pay your annual dues now.

Already a member and want to get more involved? Check out our volunteer opportunities or contact us.

NWP's 2019 Educational Symposium on  "Arts in Our Community"

With NWP member and MC extraordinaire Punam Mathur at the podium, members and guests heard from a panel of community arts leaders on the topic of the arts and philanthropy in our community. The panel took the stage at the Las Vegas Academy of the Arts Lowden Theater and members enjoyed tours of the LVA campus following the conversation. The annual Educational Symposium offers NWP members insight from community leaders in various areas of community and philanthropic interest. Past symposiums have focused on public education, healthcare, and other pertinent and timely subjects. 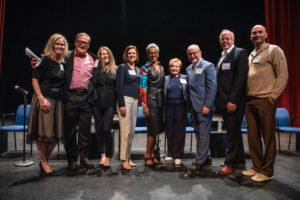 Take a stand against domestic violence by raising awareness and honoring survivors, friends, and family.  The event has gone virtual this year, but the need is more critical than ever.  Register NOW and complete your run/walk at your convenience any time before October 31.  To register or get more information, use this link:   http://bit.ly/runforhope5k

NWP Members join 2019 Impact Grant recipient Lutheran Social Services at the site of the new DigiMart expansion. Beginning on 3/16, they implemented COVID-19 Emergency Food Distributions, which provide individuals who visit LSSN with an Emergency Box of food that includes canned goods, dried staples, bread, vegetables, and meat (when available). They are now serving clients outside in the parking lot and have two simultaneous lanes, one for cars and one for individuals who are walking. No preregistration is necessary -- individuals can sign up and receive food on the spot. They have seen a definite increase in the number of people who need food from the DigiMart. As of mid-April, they have served 1,324 families and 4,370 people. Thank you NWP Members for making the DigiMart possible for our community!

COVID-19 NWP Partner Agency Update – As Southern Nevada residents and the rest of the country suffer the uncertainty and economic instability of these unprecedented times, our thoughts are with those affected most and at highest risk. It is times like these that community investors make the biggest difference. We are in this together. Please click here to learn how you can help our partner agencies.

We are proud to offer NWP members the chance to promote their transformative work with a Fall Clothing and Emergency Supplies Drive. Items can be purchased through the Amazon Wishlist link or at any retailer with similar items (please refer to the attached flyer for designated size/color combinations as they organize items a certain way).

Your donation can be shipped directly or dropped off at the Rape Crisis Center at 801 S. Rancho Drive, Suite C3, Las Vegas, NV 89106. If you prefer, you can also drop items off at the home of Sara Costello or Heidi Friedlander. Please have all items shipped or dropped off by October 31st.